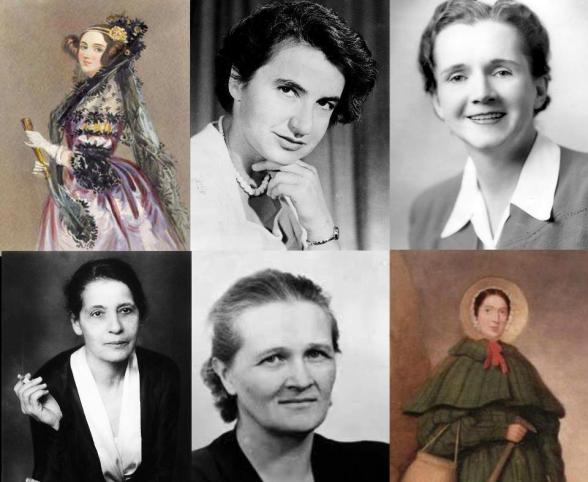 Happy Women’s Day to all you lovely ladies out there! Here are six women scientists you should know but don’t.

1. Ada Byron was the daughter of a brief marriage between the Romantic poet Lord Byron and Anne Isabelle Milbanke, who separated

from Byron just a month after Ada was born. She was a gifted analyst, metaphysician, and a founder of scientific computing.

2.  Rosalind Franklin. There is probably no other woman scientist with as much controversy surrounding her life

3. Rachel Carson was a marine biologist and conservationist. She held the view that human beings were but one part of nature

distinguished primarily by their power to alter it, in some cases irreversibly. Disturbed by the profligate use of synthetic chemical pesticides after WWII, she wrote Silent Spring and challenged the practices of agricultural scientists and the government, and called for a change in the way humankind viewed the natural world. That book, along with her other writings, are credited with advancing the global environmental movement.

4. Lise Meitner, a physicist who worked on radioactivity and nuclear physics, was part of the team that

discovered nuclear fission (in fact, Otto Hahn, one of the head hanchos of the project, met with Lise secretly and she helped him greatly when they were stuck in the wrong direction), but Lise was overlooked for the Nobel Prize in favor of male colleagues.

5. Cecilia Payne in 1925 became the first person, woman or man, to receive an Ph.D. in astronomy from

Harvard. Shapley had attempted to get her a Ph.D. in the already existing physics department, but the chair refused. To get around this roadblock she received her Ph.D. in astronomy instead. Her Ph.D. thesis, later labeled as “the most brilliant Ph.D. thesis ever written in astronomy”, was an explanation for the composition of stars in terms of the relative abundances of hydrogen and helium.

6. Mary Anning. Despite the fact that Mary Anning’s life has been made the subject of several books and articles,

comparatively little is known about her life, and many people are unaware of her contributions to paleontology in its early days as a scientific discipline. How can someone described as ‘the greatest fossilist the world ever knew’ be so obscure that even many paleontologists are not aware of her contribution? She was a woman in a man’s England. When she was only 10 or 12 years old, Mary help to discover the first specimen of Ichthyosaurus to be known by the scientific community of London.