2. Gay marriage will encourage people to be gay (in the same way that hanging around tall people will make you tall.)

3. Legalizing gay marriage will open the door to all kinds of crazy behavior. (People may even wish to marry their pets because a dog has legal standing and can sign a marriage contract.)

4. Marriage has been around a long time and hasn’t changed at all. (Women are still property, blacks still can’t marry whites, and divorce is still illegal.)

5. Marriage will be less meaningful if gay marriage were allowed. (The sanctity of Britney Spears’ 55 hour just-for-fun marriage and Kim Kardashian’s 72 hour marriage would be destroyed.)

6. Straight marriages are valid because they produce children. (Gay couples, infertile couples, and older people shouldn’t be allowed to marry because our orphanages aren’t full yet, and the world needs more children.)

8. Gay marriage is not supported by religion. (In a theocracy like ours, the values of one religion are imposed on the entire country. That’s why we have only one religion in America.)

9. Children can never succeed without a male and female role model at home. (That’s why we as a society expressly forbid single parents to raise children.)

10. Gay marriage will change the foundation of society. (We could never adapt to new social norms. Just like we haven’t adapted to cars, the service-sector economy, or longer life spans.)

Former Teen Mom star Farrah Abraham not only decided to wax her little girl’s unibrow, stopping mid-way when the child protested, only to finish the job while the little girl slept (Side note: can you imagine creeping into your daughter’s bedroom while she slept with a pair of tweezers in your hand? In what world is that normal? That sounds like a creepy slasher movie or some shit), but after that proudly blogged about it, saying “I feel like a good mom!”

Dearest Mommy Farrah did it because she “felt bad for her.”

But what can we expect from a woman who just threw down 16 grand on plastic surgery for her breasts, chin, and nose?

It’s one thing to use a tweezer on your baby, but wax?? That could have burned her. She’s three years old! Jesus, woman, have you no sense? Who the hell cares if a 3 year old has a unibrow?

One consequence of such early-in-life beauty obsessions experts say is that it teaches young girls to value themselves based on how they look instead of who they are. If you’re going to start her worrying about how her eyebrows are shaped at 3, how can you expect her not to worry about her beauty? This plugs right in to how young children think already; they focus on what they can see and not what lies underneath. You have already started your daughter on the path to body issues.

And what are children supposed to think if their own mother–the woman who gave birth to them, the one person in the world who is supposed to love you no matter what–feel bad for you because you have a unibrow. Farrah basically told her daughter that her own mother doesn’t think she’s beautiful. And she’s teaching her to blindly accept the popular culture’s definition of what pretty is.

Being taught to focus on beauty can lead to a lifetime of psychological and social problems. If your mother values you based on how you look, you in turn will learn that behavior, and then appearance becomes the focus of what you care about. Only caring about appearance undermines emotional attachment, which can in turn cause an inability to make or maintain caring relationships, or develop a positive self image.

I just don’t understand why you would ever want to wax your child’s eyebrows. She’s a child. So what? She’s supposed to run around with other kids, and play in a sandbox, and believe in the Tooth Fairy, not worrying about if she’s beautiful or not.

Of course, her mother is a person who got pregnant as a teenager and then thought it would be a good decision to be on a reality show. (Honey, to get on a reality show these days, your life has to be pretty screwed up. Just an observation.)

I find that most of my human interactions happen in cafes or cafeterias or restaurants. I wonder why that is. Something about the watering hole, I’m sure, brings people from all backgrounds and thought bubbles into one place. The watering hole is an equalizing gathering place.

Enough musing. As I said before, I was in a cafe. A regular college cafe full of regular college students. Behind me I heard a group of girls laughing and talking about Buffy, Firefly, and Joss Whedon. I was just thinking about turning around and talking to them, perhaps I would even whip out the Firefly DVD case I happened to have in my backpack, when the conversation turned to Nathan Fillion, and then to Neil Patrick Harris.

And, unfortunately, the conversation took a predictable turn.

Too bad he’s gay. I am so sick of hearing this. What does that even mean? Like, if he weren’t gay, you would have a shot at him and

could get married to him and live happily ever after? I don’t think so. Even if Neil was the womanizing Barney from How I Met Your Mother, random girl in Utah, I still don’t think you would have a shot at his genitals, and even if you did, you’d probably break up anyways. Just saying.

But then these girls went on talking.

“He can act, sing, dance, and he’s gorgeous! What a waste that he can’t have kids.”

Those words have been ringing in my head ever since I heard them.

A waste of what? I understand the fact that you would like to get good genes into Humanity’s gene pool and continue on the Harris line of awesomeness, but those words. A waste of genes? A waste of a pleasurable sexual encounter? Or are you somehow implying that he’s a waste of life?

That last one seems a little extreme, and she probably never meant that in her wildest dreams, but you can’t help but stop on those words and wonder what was wasting away?

This is the problem. This is why it’s going to take a while for marriage equality, because of an underlying attitude in today’s culture that undermines equality. .Too bad…... What a waste…... Why are all the good men married or gay….... This attitude, that gays are some how not worthy, or they’re stealing away chances of happiness from women, is more detrimental than the hardcore anti-gay protesters. Because there’s always going to be someone who will protest, but it’s like this attitude is infecting the pro-gay people.

I believe in gay marriage. It’s just too bad that they’re gay.

That’s not really helpful, now is it? It’s not really equality, it’s not really tolerance, and it’s not really acceptance. In the back of people’s minds, there’s still this nagging. We can’t seem to accept people as people–purely and only as people who have feelings and ideas and something to contribute to the world other than children and sex.

How many times have we seen this? Just go to any Adam Lambert song on Youtube and see for yourself. The comments are not about how well done this song was, or what an amazing voice he has, or what the video means. All of the comments are qualified and tainted with something like 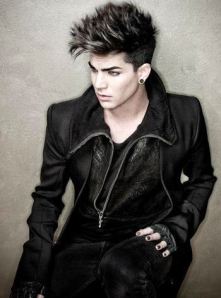 I mean, seriously, when did he come out? Three, four years ago? And we still can’t get over it. We can’t just talk about his music, we can’t just say he’s talented, we can’t have a conversation about him being hot or him being our favorite singer without yourself or somebody else chiming in You know he’s gay, right? I’ve never been able to.

This ‘If Only He Wasn’t Gay’ thing has to stop. It has to. Sticks and stones may break bones, but words hold the real power. They last. They hurt. They break. They change the world.

The words that come out of our mouth reflect our thinking, and right now it doesn’t look good. How we think affects how we act, and our actions affect others.

We the people of the United States hold these truths to be self-evident, that all men are created equal, that they are endowed by their Creator with certain unalienable Rights, that among these are Life, Liberty and the pursuit of Happiness.

Molly Weasley is in fact a feminist. Some people think that she isn’t a feminist because she’s so grounded in domesticity, but her motherhood does not negate her feminism.

Some people have argued that the final fight scene between Molly Weasley and Bellatrix Lestrange is a symbolic fight between motherhood/domesticity and feminism. They say that motherhood is chocked full of characteristics that feminists despise. They say that J.K. Rowling wrote from a Christian perspective to show the value of true womanhood or some other bull like that.

It’s not true, because feminists don’t hate motherhood. Feminism is about equality between the sexes. Giving women every opportunity that a man has, and every advantage, and every right to do so. A woman should be able to do whatever she wants with her life, and should be able to accomplish that goal if she works hard and is good at that particular thing. She shouldn’t be held back just because she has ovaries. This encompasses everything from a Fortune 500 CEO to a stay at home mom. To each her own.

Not my daughter, you bitch!

The very idea that feminists could somehow despise motherhood is beyond. That’s just blatant anti-feminist propaganda  Feminists clearly want us all to stop be loving, nurturing, and warm. Of course those evil feminists want all women to be barren so they don’t have to be afflicted with the sexist burden of children.

It’s true that Molly doesn’t fit the traditional feminist roll; nonetheless, Molly Weasley is a feminist. She’s strong, independent, nurturing, determined, intelligent, strong-willed, loyal, loving, egalitarian, the head of her household–a house filled with mostly boys, and she can fight. She is a fierce warrior who is deadly with a wand. Molly Weasley is not the embodiment of family fighting against the embodiment of something else. She’s a feminist fighting for family.