The other day I was eating in an eatery here on campus, and the table next to me had two guys sitting at it. Big guys. Strong guys. One’s shirt didn’t have sleeves. Why is this important? I’m just trying to paint you a picture here, people.

(Gah! I just missed a fantastic picture opportunity. The guy looked like this:

Anyways, the guy’s shirt is not what made them stand out. It was that both of these guys were munching on huge platefuls of… salad.

Yes, salads. and as they ate their salads they dug around in the lettuce with their forks, playing with their food, hunched over slightly (as guys are wont to do when they eat). Why did this catch my attention?

I know why it caught my attention. It was society’s gender stereotypes that had leaked down into my brain. I could feel the hegemonic masculinity oozing out of my ears.

Girls watch what they eat.

Girls care about their health.

And guys eat burgers and steaks and fries and grease.

And I am so disappointed in myself for having these inclinations. Because of course salads aren’t just for girls. That’s stupid. Kudos for those guys for trying to get more vitamins in their diet. (Although, you really should chose the spinach over the iceberg lettuce. Iceberg is really just water and chlorophyll.)

Those tiny leafs and bits of chopped carrot don’t negate your masculinity. It’s not like Kriptonite to Superman.

Or suntan lotion to these guys

Or denture cream to the world. (That stuff is gross. Just have your not-good-enough son-in-law pre-chew all your food for you. That’s what they’re good for.)

… What? No, ignore that last thing. I don’t know what I was thinking. Point is, eat your salads. Just look at how happy this guy is! 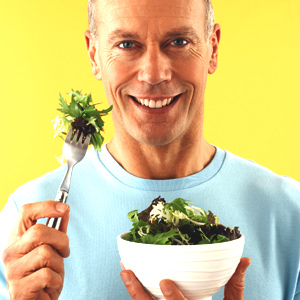