I’ve been to a few sketchy websites in my time, (Please don’t report me to the Internet Police) and one these websites, where I was not pirating binary systems relating of the Big Bang theory, were advertisements for Asian and Russian girlfriends. Strangely enough, I am in no need of a Russian girlfriend, but it caught my attention nonetheless.

It reminded me of something my professor said in my Sociology of Gender class. Men who ordered Asian brides reported the highest happiness and satisfaction with their marriage/purchase. The highest out of anyone anywhere, in fact. That is, until their wives learned to speak English. The husbands and wives quickly separated as friends after that.

This got me thinking again. (Confound this brain of mine). Isn’t this sort of like Ariel and Eric in The Little Mermaid? I mean, they had no means to communicate to each other. No sign language, no hand gestures, no writing notes back and forth to each other (come on, she didn’t know how to write). They had no means of communication. All their interactions were based on body language and physical attraction–kind of like a mail-order bride. Except Eric didn’t realize he was going to be marrying the woman who showed up on his doorstep. 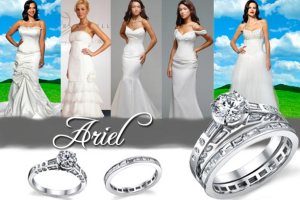 And now you too can combine the best of both worlds with these stunning Ariel-inspired wedding gowns. “Channel Ariel with charm and wonder…” is the tagline for these dresses.

You can take a personality quiz on this site, and then get matched up with the Disney character that “is your inner princess”. Do you want to be a sixteen year old fish? Are you trying to relive your childhood? Are you too a fish literally out of water?

“Your flaws are childish, but you also look at the world with wonder and excitement, as a child would.”—> Straight from the website.

I do like the very classy sky/meadow green screen in the background though. It really makes me want to buy the dress.

No, it makes me want to buy the girl.  And… runaway with her to a vague grassy hilltop? That is, until she learns how to talk back. Then I’m on to Sleeping Beauty bride.